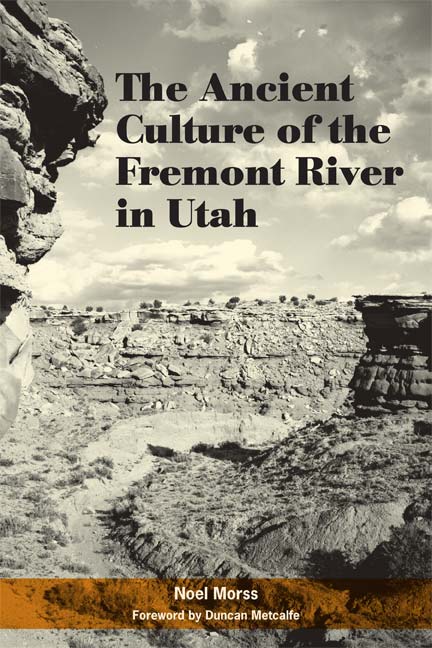 Until 1927, the wild area of Utah near the Colorado River and below the mouth of the Escalante River was almost unknown archaeologically. The Claflin-Emerson Fund of Harvard’s Peabody Museum was created to provide support for an extended survey of southeastern Utah west of the Colorado River.
One such survey was conducted by author Noel Morss during the summer of 1928, resulting in an unexpected revelation: the Fremont (Dirty Devil) River drainage area being surveyed proved to be host to a prehistoric culture different from all other established Southwestern cultures. Excavations completed the following field season confirmed Morss’s findings. This distinct culture was defined by unique unpainted black or gray pottery, sole use of a primitive moccasin type, elaborate clay figurines, and abundant distinctive pictographs. Though too definite and well developed to be confined to a single drainage, Morss concluded that the Fremont were nonetheless a periphery culture and not an integral part of the mainstream of Southwestern development.
Originally published in 1931 and now featuring a new foreword by Duncan Metcalfe, The Ancient Culture of the Fremont River in Utah has become a classic in Southwestern archaeology, furthering a conversation about the early peoples of southern Utah that continues even today.
Noel Morss (19041981) was a lawyer who also served as research fellow in prehistory of the American Southwest for the Peabody Museum. He was a founding member of the Council on Old World Archaeology and is recognized as having defined the Fremont culture of eastern Utah.