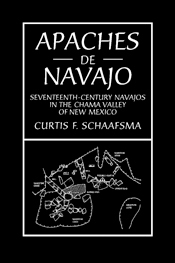 Where did the Navajo people come from and when did they differentiate from the larger Athabascan group? Using historic documents, linguistic evidence, and archaeological sites near Abiquiu, New Mexico, Curtis Schaafsma makes the case that in the late 1500s all Apache groups, including ancestral "Apaches de Navajo," as the early Spaniards called the Navajo, were tipi-dwelling buffalo-hunters living on the high plains of New Mexico. From there, the Apaches infiltrated the hinterlands around the Rio Grande Pueblos.

In the 1970s Curtis Schaafsma excavated a number of sites in the Piedra Lumbre Valley that he attributed to the "Nauaj" mentioned by Benavides in 1630. The sites, stone-walled structures, dated from approximately 1640–1710 and were architecturally and artifactually closer to what could be expected of 17th-century Navajo culture than other possible ethnic groups. Since then, other researchers have proposed that the sites were Tewa or Hispanic instead.

Apaches de Navajo presents Schaafsma's archaeological work in a full synthesis that responds to the alternative proposals. In the light of newly translated and published documents he maintains that the sites were occupied by the "Apaches de Navajo." The presence of 17th-century Navajo sites near the Rio Grande Pueblos strengthens the long-proposed interpretation that they, like all the other Apache groups, derived from the 16th century buffalo-hunting Apaches of the high plains.

Curtis F. Schaafsma is curator emeritus of anthropology at the Laboratory of Anthropology Museum of New Mexico in Santa Fe.

Table of Contents:
List of Figures and Tables
Acknowledgments